Ride the Train: Enjoy a train ride through cave 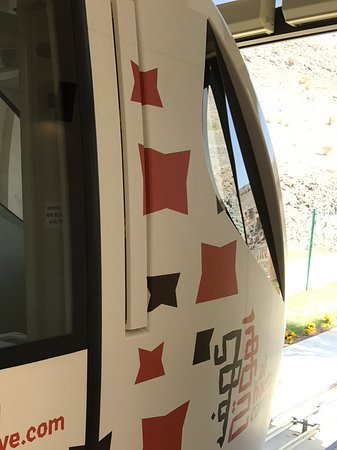 Popular posts from this blog

October 11, 2015
Al Hoota Cave Estimated to be over 2 million years old, Al Hoota Cave is located at the foot of Jabal Shams, in Al Hamra district. The cave was first opened to receive tourist on the in November 2006 during 17th National Day, after setting walkways, stairs and a light system to make the cave an enjoyable and safe experience for visitors. It is the first and only show cave in the Gulf area, which is accessible to the general public. The total length of the cave is around 4.5 Km, of which 500 m is open for tourists, in other words, around 10 % of the entire cave distance is for touristic use. The tour inside the cave is about 45 minutes with the guide, who will stop visitors in different points to share with them on the story, history and formation of the cave. Al Hoota Cave contains a rich ecosystem that includes two lakes, one is a small northern lake and the other one is the central lake. The underground lake estimates to be holding 30,000 m³ of water. The main lake is 800 m long a
Post a Comment
Read more

July 08, 2017
Muscat:  Almost 13,000 people visited Al Hoota Cave during the Eid Al Adha holiday, Omran, the operator of the cave complex, said. “Thousands of visitors flocked to Al Hoota Cave following its recent reopening. Over the Eid Al Adha holiday, above 12,700 people visited one of the region’s leading natural attractions to enjoy the cave experience and its enhanced facilities. The high turnout of visitors reinforces the interest in Oman’s natural wonders, and that local and regional tourism in Oman is on the increase,” the tourism investment body said. The mix of visitors included local Omani tourists as well as people from the GCC including Saudi Arabia and the UAE. Anticipating a large turnout, Omran and the on-site team operating the cave made the decision to open on Arafah day and the first day of Eid to accommodate visitors who made the trip in order to rediscover the wonders of the cave. Marking the huge interest in the cave, it remained open an additional three hours per day in ord
Post a Comment
Read more